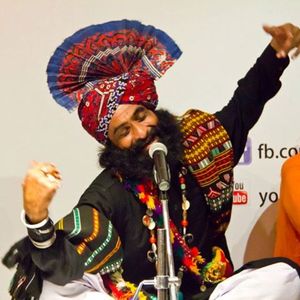 That in-your-face, LOUD rock could flourish in Pakistan comes as no surprise to Farhad Humayun, drummer and driving force behind the legendary, high-intensity band Overload. Percussion powered, the Lahore-based group channels both the brash spirit of rock and the beats and sounds of Pakistan.

Now Americans will have a chance to hear Overload in all its pounding, storming glory at SXSW 2016, as part of Islamabad-based Foundation for Arts, Culture & Education (FACE)’s second Pakistan Showcase. With support from the US Embassy, the arts organization is bringing US audiences at the festival a powerful glimpse of Pakistan’s vivid, diverse cultures and music.

Overload’s origins lie in the sounds of the country itself, its urban noise and pounding beats. “If you think about where heavy metal began, it was in industrial cities,” explains Humayun, with a smile. “The bands were in this intense, loud environment, and Pakistan is similar, in that it’s loud.”

Like many teens, Humayun picked up the acoustic guitar. But it never felt right. “It was too quiet,” he recalls. “I was drawn to the drums.”

Humayun saved up and bought his first drum kit. He was hooked. He wasn’t into the subtleties at first--that came later--but into the sheer impact of the instrument. “When you’re growing up in a place like Pakistan, there’s a lot inside you that you don’t understand. It was a suppressed environment. ,” he notes. “When I was playing the drums, I felt I could express all that I had inside.”

Humayun became a session player, and eventually met keyboardist Sheraz Siddiq, Overload’s co-founder. The two friends began jamming regularly and playing with several dholi, the raucous double-headed drum players found at many Pakistani celebrations and Sufi shrine ceremonies. The traditional percussionists spoke an obscure dialect, but the city boys found ways to communicate via rhythm and gesture. The jam sessions were hard to miss, and they caught the ear of a programmer from Pakistani national television. That performance marked their first gig, and the band was formed.

Over the years, Overload released several albums and reached cult status, in part because of its ingenious appeal to both rock and South Asian sensibilities. The band’s compositions increased in complexity, with vocals and lyrics playing more prominent roles in the group’s latest recordings. Never content to do what they’d done before, Humayun has also included Punjabi brass players popular at weddings, bagpipe ensembles, and other unexpected subcontinental sounds to his tracks. Yet the seeds of each song lie in rhythm, and Humayun often comes up with ideas by playing around on the duff (a large frame drum with metal bangles).

“Many songs I write start with the rhythm pattern,” says Humayun. “I’ll play around on the duff, which is quieter and has more bass happening. I’ll start from there and build the song around it.”

Yet one thing unites Overload’s work: the love of the beat, and the commitment to dynamic performance. Like the dholi members of the band--Sain Nasir and Mushtaq Ahmed will be coming to SXSW in March--Humayun can often be seen playing on his feet, unable to sit still behind the kit. It’s energy with a purpose. As a frontman, he’s determined to bring the music of his homeland to new listeners, from a fresh, unflinching perspective.

“One thing I think more people need to know about Pakistani music is that we are extremely sensitive and considerate people, and that is reflected in our music to a large degree,” muses Humayun. “When you listen to the music, you need to forget everything else you’ve heard. Block out all the political stuff, then you’ll get the real vibe.”